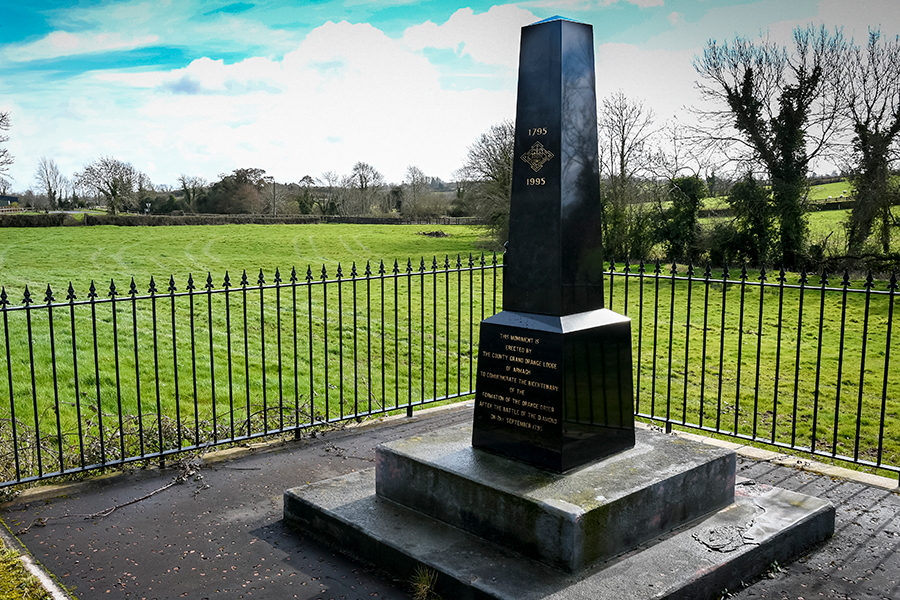 Battle of the Diamond

(This account is written in Joseph Atkinson’s hand on the rear of an account ledger commencing 1752 which, along with other Atkinson estate pages, was donated to Armagh County Museum in 1969 and is referred to as ARM126 1969. In addition there is another torn letter in copperplate handwriting in the ledger dated March 16 1825 giving a similar account.)

For several days prior to 21st September 1795 this neighbourhood was disturbed by riots of Defenders and on the 18th day of said month, they took possession of the gravel pit of Annaghmore, their position amounting I should suppose to about 500 men and having a white flag hoisted; on which the whole neighbourhood of good loyal Protestants became alarmed and assembled on the hill of Cranagil opposite to Annaghmore – on the morning of the said day a skirmish took place in the townland of Teaguy in which there was a man killed of the name McCan a Defender who had previously declared he would violate one of the prettiest Protestant girls in the Parish of Tartaraghan. Sometime on the day Archdale Cope, Robert C. Cope his brother, John Hardy, Counsellor Archdale with priests Tagart, McPartlin and Trainor came to my house [Crowhill] and we all went to the Protestants where they were stationed on Cranagil. Archdale Cope and priest Tagart proposed to me to make the Protestants lay down their arms, whereupon I proposed that they should not do so until the Papists first lay down theirs, as I considered that the former were entitled to carry arms, whereas the others were not, on which Tagart spoke out and said they should fight it out to which I replied ‘with all my heart’ – we however then rode over to Papist party where an old woman shouted: ‘there is Atkinson the traitor’ and immediately one of the party levelled his gun at me when a tenant, a woman who lived on my land caught the gun and declared her Landlord should not be shot, on which we rode off and got round to my house when it was proposed that priest Tagart should secure the Papists and I would secure the Protestants in £500 each. The preliminaries were drawn up by Counsellor Archdale and signed and witnessed by me, the priest [Tagart?] this money was to be forfeited by either of the parties breaking the truce. This day I kept the priests to dine with me and at night they proposed staying at my house. I told them I had not beds for them, but said we might sit up all night, which we did and during the night several Protestants came to my house and declared the opposite party was firing on their houses. I said then in presence of the priests, not to fire a shot, as it would gain me £500, but if they should attack their houses then to put them to death if possible. On Saturday they were skirmishing through the neighbourhood. No lives lost this day, on Sunday all was perfectly quiet and remained so all night. I rose up on Monday 21st at about 5 o’clock and immediately after the firing commenced on the Protestant houses at the Diamond, this we did not expect, numbers came flying to my house. I gave out all the ammunition I had and set out immediately with my family for the Fort of Charlemont, as I was well aware that their great object was to destroy my house – on the road I heard that the Protestants were winning. I then made my family return. I went on to Charlemont myself. I got Capt. [Villiers?] and 60 invalids to accompany me and when we arrived at the Diamond the battle was over. The man who commanded was Captain McGarry from the White Cross above Armagh. There were about 300 of the Defenders well armed and all strangers. Quigly did not appear but I understand that he was the person who conducted them there. McGarry and about 16 were killed. Afterwards I heard there were a great many more – this ended the Diamond fight which is in Rudock’s Grange about a short [mile from my house?] and these are the facts that cannot be contradicted.